YOU BUY, ELEPHANTS D I E : THE IVORY WAR IS KILLING ELEPHANTS I N TO EXTINCTION

click on the elephants above to go to http://iworry.org/
by B. Seeton
The continuing existence of ivory markets is one of the greatest threats to elephants today. When you buy ivory souvenirs, you’re likely buying ivory from an elephant that was slaughtered to supply the demand. Just say NO to  ivory. Poachers would have no reason to kill if they had no one to supply.
Elephants are very emotional animals with the capacity to love deeply. When baby elephants are rescued after losing their mothers to poaching, they wail in grief and exhibit fear and great emotional pain. They can even die from the trauma. 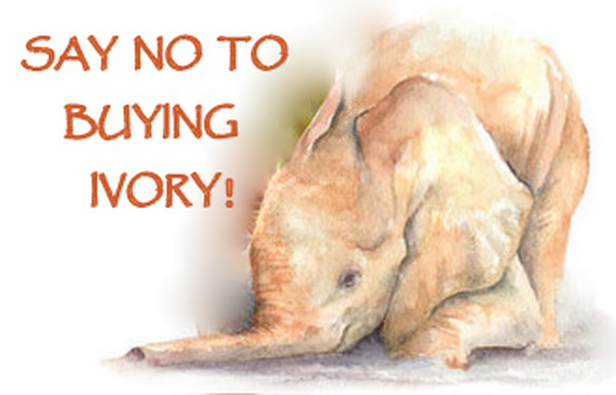 PAINTING ADAPTED FROM DAVID SHELDRICK TRUST
ARE YOU PART OF THE DEMAND FOR IVORY WITHOUT EVEN KNOWING IT? 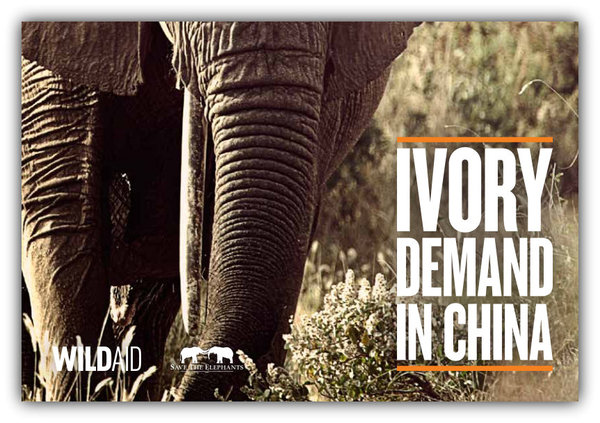 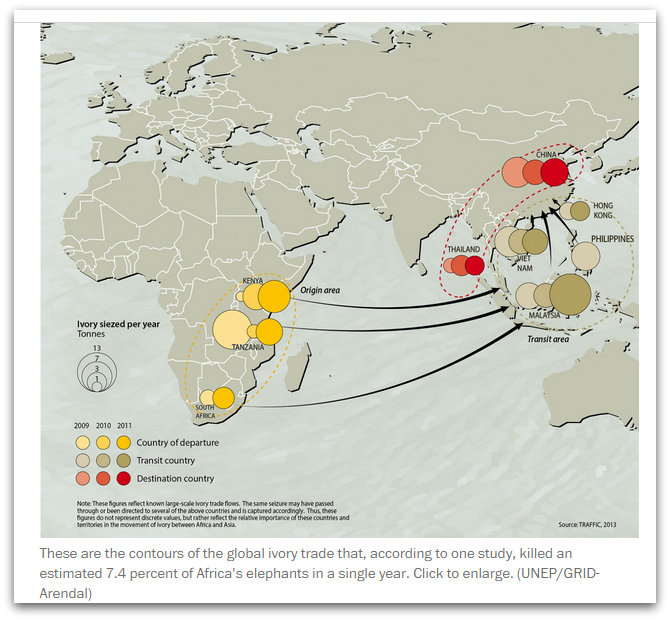 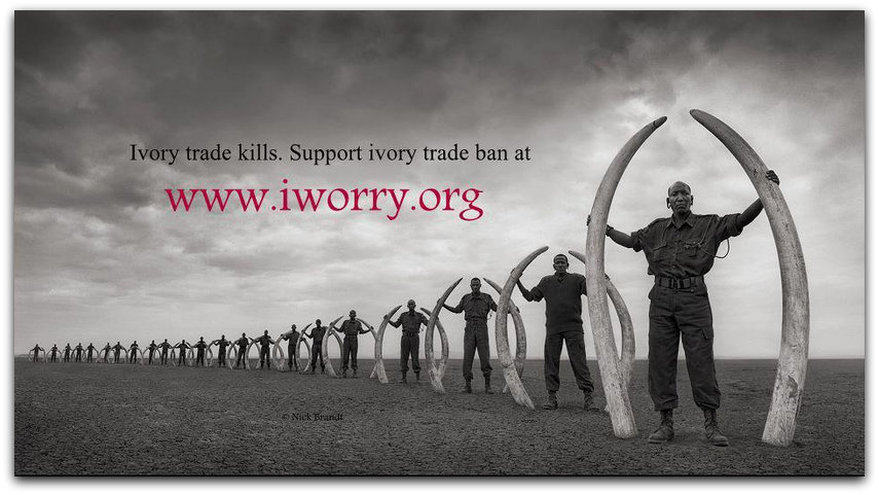 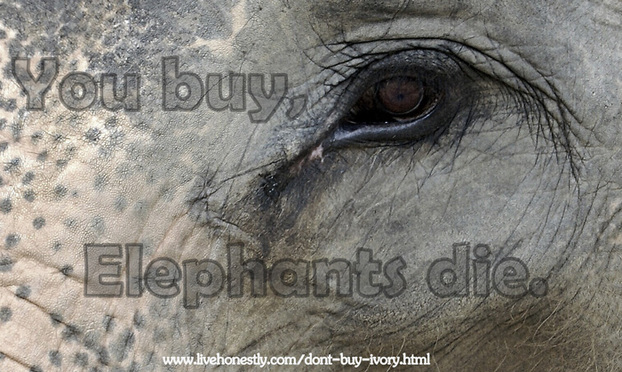 The Humane Society of the U.S. wrote an article titled:
Illegal Ivory Trade in Our Own Backyard.
They uncovered a thriving market for illegally traded elephant
ivory in the United States. Unfortunately, old news remains
current news. America still has a killer appetite for ivory...
read the story below .... CLICK HERE FOR ARTICLE

Straight from the HSUS website from 8 years ago:  An eight-month HSUS investigation has uncovered a thriving market for illegally traded elephant ivory in an unexpected place: the United States, a nation that prides itself on the protection of endangered species and vigilance in enforcing the ban on international ivory trade. A confusing jumble of U.S. laws has allowed ivory markets to thrive in various areas: in San Francisco, in New York, on the Internet, even at craft shows in Virginia. These markets may seem innocuous to the people who still have the need to buy ivory, but they are deadly, no matter how indirectly, to the elephants who actually supply the raw material for these popular trinkets, knickknacks and pieces of jewelry.

The Ivory Ban
It's no secret that elephants are facing extinction because humans value ivory. In 1989, the international trade in ivory from African elephants was banned by the Parties to the Convention on International Trade in Endangered Species of Wild Fauna and Flora (CITES), the treaty that governs much of the international trade in plants and animals. International trade in Asian elephant ivory had already been banned in 1975. Before the 1989 ban, CITES had tried to regulate and control the ivory trade. It couldn't. By 1989, it was estimated that 90% of ivory in the so-called legal trade was from poached elephants. It was clear that a legal ivory trade was a death sentence to elephants. Individual nations passed laws to implement that ban.

The Legal Trade
In the United States, African and Asian elephants are protected by the Endangered Species Act and the Asian and African Elephant Conservation Acts. But each year the U.S. government allows the legal import of thousands of elephant ivory objects, mostly in the form of carvings, but also as jewelry, unworked pieces, piano keys, hunting trophies, and individual tusks. Legally imported ivory was valued at an average of $164.8 million per year between 1997–2001.

Dealers who sell ivory domestically do not have to register, nor must they report sales. Even the Office of Law Enforcement of the U.S. Fish and Wildlife Service (USFWS), the agency charged with intercepting illegally imported ivory, agrees that the law regarding hunting trophies--hundreds of which are imported each year--is unclear. 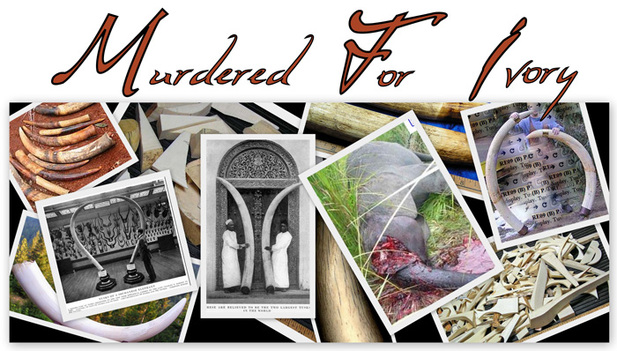 Pictures of confiscated ivory, museum pieces (world record tusks), ivory scraps 'legally' obtained, proud owners of coveted tusks with one thing in common: DEAD ELEPHANTS
Go Ahead, Try to Enforce
A USFWS agent faced with a shipment of ivory cannot tell by sight if that ivory is antique or if it comes from an elephant or a mammoth (an extinct species whose ivory may be legally traded). The ivory must be sent to the USFWS National Fish and Wildlife Forensics Testing Laboratory for testing.

And even the experts at that laboratory cannot always distinguish between ivory from African or Asian elephants, or between ivory from an elephant and a mammoth. If one of the most advanced wildlife forensics laboratories in the world has a hard time distinguishing between ivories, and thus between potentially legal or illegal items, the laws governing the U.S. ivory trade cannot be effectively enforced. If thousands of ivory items are seized and shown to be illegally imported each year, thousands more must surely escape detection. Even if detection were not difficult, enforcement would still be stymied by the scarcity of USFWS inspectors: There are only 95 in the entire country, not enough to monitor the 110,000 ivory shipments that arrive each year. In any case, U.S. law provides no strong deterrent to illegal ivory imports. Although a fine and prison sentence are possible in the large smuggling cases, it appears that in the vast majority of cases, the punishment is no more than the loss of the seized item.

Of Documents and Dealers
In the course of their investigation, HSUS staff encountered a surprising number of ivory sellers and buyers who either did not understand U.S. ivory laws or were comfortable breaking them. Dealers offered to forge documents to indicate an ivory carving was over 100 years in age or, in the case of an elephant tusk, had been legally imported as a trophy prior to 1989. At least one salesperson in another country offered to have fraudulent CITES documents prepared in order to export elephant ivory to the United States. However, the vast majority of ivory offered for sale in the United States appears to be sold without any documentation, legitimate or forged. The main U.S. elephant tusk buyer is a private museum in the Mid-west. This museum operates a web site and also offers items regularly on eBay.

When questioned about the law regarding the purchase of elephant tusks, the owner told undercover HSUS investigators his stratagem for avoiding being caught illegally buying post-1990 tusks: The seller will donate the elephant tusks to him, and then a minute later or before, the owner will buy a pencil from the seller for the price of the tusks. If the USFWS asks him if he bought the tusks, he will simply say that they were donated. Those in the ivory trade know how to evade USFWS inspectors. At a workshop of ivory dealers and carvers, a participant explained that the best time to import ivory is on the weekends when USFWS agents are not working, and the best places are through small ports of entry, such as Alaska, where there are fewer USFWS agents. Participants were even advised to place small ivory items in their luggage in a certain manner to avoid detection by X-ray machines.

Enter the Internet
The Internet, particularly the U.S.-based company eBay, has provided an easy means by which ivory can be bought and sold. On eBay, anonymous people in unknown locations can buy and sell ivory without fear of prosecution. Each day, over one thousand ivory objects are offered for sale on this site. Although most ivory buyers and sellers on eBay appear to live in the United States, many offer their products from other nations. When asked, many selling ivory on eBay admitted that they didn't know the origin of the ivory they were offering for sale. Some eBay sellers offered to forge documents—usually to claim that the ivory was antique—to get around laws. The eBay site provides guidelines regarding the sale of prohibited, questionable, and infringing items, placing responsibility for obeying the law solidly in the hands of the buyers and sellers who use the service. This area is complex, and sellers should consult with the USFWS and their state wildlife agency to ensure that the particular item involved may lawfully be sold.

Trade = Extinction The continuing existence of ivory markets is one of the greatest threats to elephants today. Put simply, elephant ivory cannot be traded without driving African and Asian elephants to extinction. Evidence shows that the international ivory trade ban has worked. Poaching for the now illegal ivory trade still continues but has slowed considerably. The continental African elephant population continues to decline at a rate of about 15% every ten years (as compared to about 50% over the ten-year period prior to 1989, when ivory trade was legal). The poaching of elephants for the ivory trade continues primarily because domestic markets for ivory still flourish.

In 1997, CITES agreed to allow a one-time "experimental" export of ivory from Botswana, Namibia, and Zimbabwe to Japan. The purpose of the experiment was to determine if it was possible to have a tightly controlled legal ivory trade without causing increased poaching and/or illegal trade. The volume of ivory seizures worldwide decreased in the five years after the ban, leveled out between 1994 and 1998, and then increased starting 1999. That was the year Japan actually received the ivory from Botswana, Namibia, and Zimbabwe.

At the upcoming 2002 CITES meeting in Santiago, Chile, Botswana, Namibia, South Africa, Zambia, and Zimbabwe will propose to reopen the international legal trade in ivory. If they are allowed to do this, poaching will skyrocket, and an already barely controlled illegal trade will be uncontrollable. If the United States, a wealthy nation with committed law enforcement officers and a state-of-the-art forensic laboratory with which to identify illegal ivory, cannot control its own domestic ivory trade, what hope have nations with fewer resources? Not only must the United States strengthen its laws and enforcement ability, it must also strongly oppose any expansion of the international ivory trade.
ELEPHANT KILLED BY CYANIDE 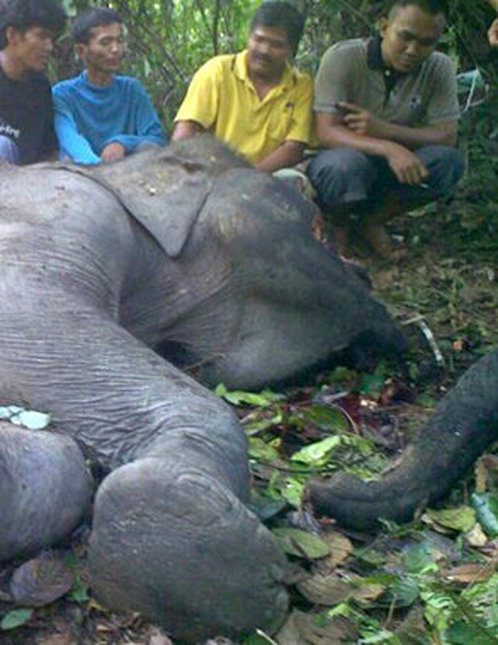 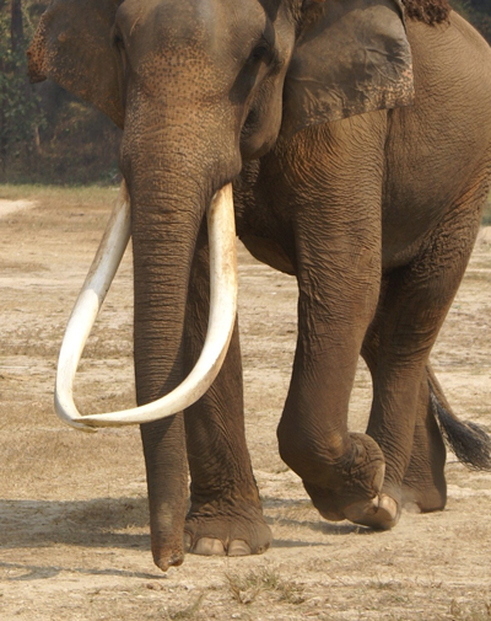 Bangkok -- photo by Betsy Seeton
Posted in Asia, Environmental  Wildlife Trade Monitoring Network TRAFFIC reported that Thailand is the world’s largest market for illegal elephant ivory. TRAFFIC found over 26,000 products that were made from ivory for sale in retail outlets. 70 percent of the stores that were selling ivory products were located in the city of Bangkok.

WRITE ME WITH YOUR COMMENTS:

Thank you, your message has been sent