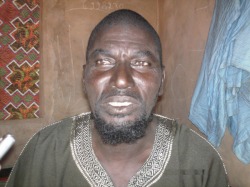 CLICK IMAGE FOR FULL STORY
Ramadan Ould Semette, a former slave in southern Mauritania who has moved with hundreds of other ex-slaves to create their own desert commune. CLICK IMAGE TO READ FULL STORY FROM IRIN AFRICA...

Map Mauritania, Africa
Starting over.. (directly from article on IRIN Africa website)
Moving on and building a livelihood is particularly tough in a country where most people already live in difficult conditions. Half of Mauritania is uninhabited and inhospitable desert territory; nearly half of its three million people have no access to safe water, according to the UN; and the food monitoring group FEWSNET estimated that more than 330,000 people suffered from malnutrition as of October 2008.