Amely-James KOh BELA
There are some whose journey upon this earth is so remarkable they should be remembered for all time; their voice, always speaking for those who can’t, should be heard now, and forever more.

Meet one of these rare souls, Amely-James KOH BELA, a truly remarkable African born woman who endured a brutal childhood as both a domestic slave and incest survivor. She possesses an indomitable spirit and fought back through education, graduating with honors with  a  degree in Financial Management and Marketing from the Ecole Superierue des Affaires of Commerce and Industry in Paris. She vowed to speak for the voiceless and defenseless in her fight for the rights of African children so that no other child would suffer the same injustice and abuse that defined her own tragic childhood.

Amely went on an unprecedented twelve year crusade through 15 African countries and all of western Europe as an undercover investigator exposing the deepest, darkest secrets of African prostitution throughout Europe.  She risked her life to single handedly investigate, interview and document nearly 1000 personal stories of sexual slavery, unimaginable exploitation and inhumane abuse.

In an interview with Amely she stated, "A child is the future of the world; a symbol of purity, innocence and hope for a lifetime. A child assaulted, raped, and sold is a crime against humanity." 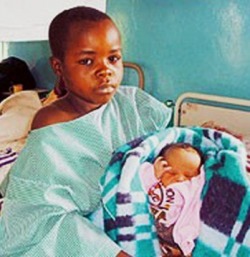 Children having children...
Two enormously important books emerged from her courageous investigation; both are published in French. (We await translation into English.) These books are revelations on the topic of African prostitution and child trafficking in Europe.

Her first book, published in 2004 called La prostitution Africaine en Occident, is a very graphic work redefining the boundaries of imagination as it exposes never before told behind-the-scenes real life stories of sexual horror, drug use, humiliation and torture.

The second book, Mon combat Contre La Prostitution, which came out in 2007, builds upon the first, and sheds light on how to bring about change to help the hundreds of thousands of children facing imminent slavery in her native Africa.  Both books can be purchased through Amazon or through www.fnac.com

Her books reveal little known facts about child trafficking of Africans into the European sex trade. She discovered that much of the prostitution is run by women and many are family owned businesses. Mothers, aunts and other family members are selling their children directly into the sex trade. The children grow up doing to the next generation what was done to them. It’s a tragic cycle that needs to be broken.

Amely is internationally recognized as a leader in anti-human trafficking and has spoken throughout Africa and Europe at many conferences, meeting halls, churches and organizations. In June of 2009 she was a featured speaker at the Woman’s Federation for World Peace (WFWP).

Amely shared some of her thoughts with me. “Any society that does not create alternate economic choices and does not know how to communicate them to their youth is exposed to the kind of sacrificial progeny I witnessed in my investigation. For some women who do not have an education, sex and the street seems to be the easiest alternative. These women dream about money and being kept by a man." Amely added,  "In some African countries, making a living as a prostitute is a noble profession. Prostitutes are often seen as a superstar."

Amely’s  research and case studies vividly point out that this dream quickly becomes the worst kind of nightmare imaginable. And for children, it is never a choice. They are tortured and brutally forced into the growing sex trade.

"Working for the rights of African children is one way I can send my message out to my family about the pain I endured," Amely told me. "It's important my family knows what I have been through and why I am defending African children."

*This is part one in a series of ten articles introducing Amely’s ground breaking work fighting African child trafficking and prostitution. Look for part two called Black Gold: A Testimonial of Living and Dying in The Sex Trade. 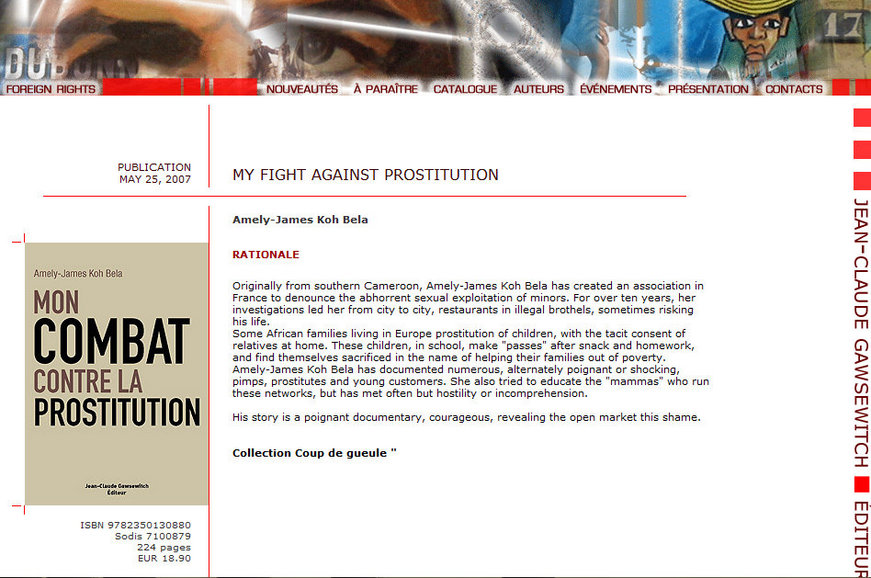 This was originally in French and translated to English.