VIETNAM ON MOTORCYCLE
by Betsy Seeton

I still had my sights on doing a motorcycle trip somewhere, someway. A few days later, I stumbled across a website advertising motorcycle tours out of Hanoi.The company was called Voyage Vietnam.  It was 6 days, 5 nights doing a 900 km loop around northeastern Vietnam. It would be with a group of under ten other riders. It sounded great. With a leap of faith, I booked my trip sight unseen through the Internet and hoped upon hope that they were legitimate. 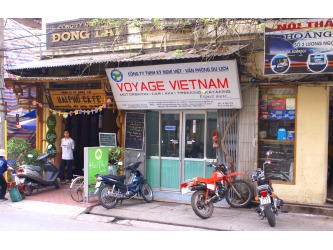 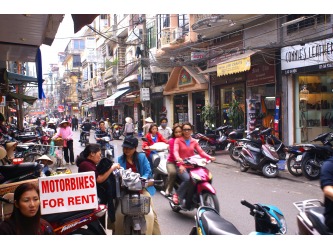 I had no idea what I'd be in for, but I'd long been inspired to do a road trip after reading Motorcycle Maintenance in the mid 70's.  I'd never thought about doing one overseas, but my spark was lit. The whole idea was intriguing and since I thrive on the unknown, the idea of seeing a country I'd never been to on a motorcycle was simply delicious. Two weeks after leaving Thailand, I flew out of Vientiane, Laos and landed in Hanoi. (In between, I did the 'Gibbon Experience' zip lining to tree houses in Northern Laos. Vist the ME page for links and a youtube video.) 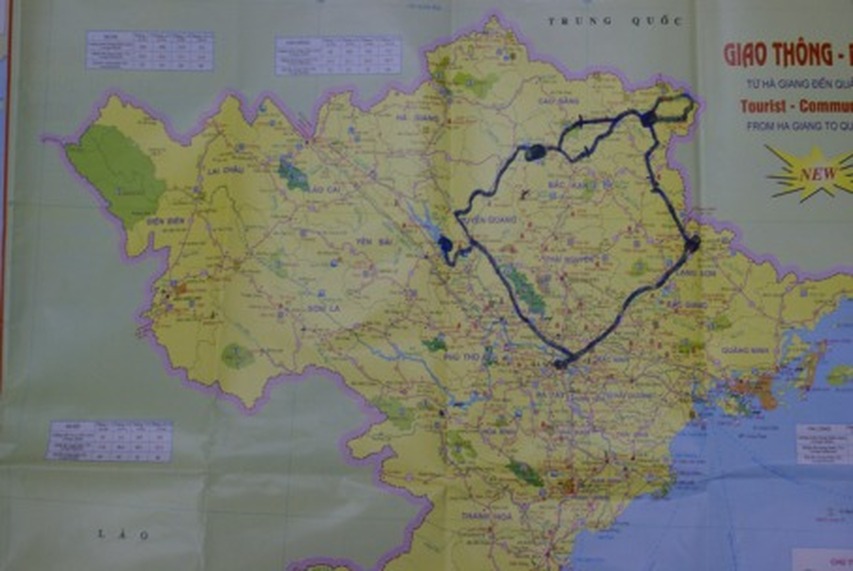 My Vietnam route
A driver from Voyage Vietnam picked me up at the airport and dropped me at my hotel.  The whole trip  including the bike, gear, accommodations and food cost under $300. It's 2+ years later and I just looked at their website. They're offering a 27 day trip  with upgraded bikes that looks to be the trip of a lifetime! For me though...27 days?? Hmm.. I don't think so. A week long trip was just the right amount of time. 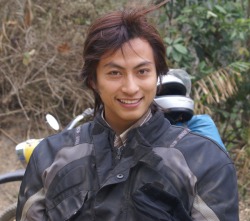 Hai (pro: Hi) my tour guide
​I did a test drive with one of our guides that included driving through the streets of Hanoi (see above and below). As I nervously navigated the traffic, I let the engine die right in the middle of a busy intersection and had to frantically kick start it amidst a blur of crazy drivers. Traffic in Hanoi was tamer than I’d experienced in Kathmandu, but it could still be described as the chaos theory in action. Imagine a school of fish or a flock of birds where each fish and bird was completely out of sync with the other, yet collectively they managed to not bump or touch one another.  If there was any directive, it most closely resembled the game of chicken. 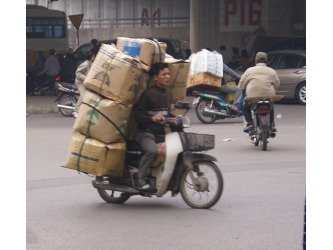 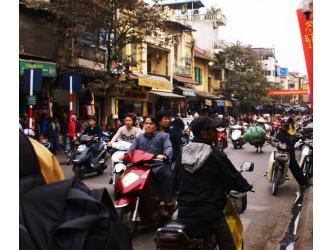 There were few traffic signals and even fewer rules. Four way intersections were a congested point of constant motion. Horns honked so much that to the untrained western ear it ceased to have any warning function.  But I concluded that the blaring horns were an integral part of the chaos theory; necessary the way cogs are to wheels turning.  From the sidelines and sprinkled into the traffic mix were pedestrians, vendors and stray animals rather mindlessly meandering. Lanes of opposing traffic, thick with scooters, cars, and bicycles would speed toward each other and at the last possible moment, before any two modes of transportation made head to head contact, one would  swerve  while simultaneously and miraculously not side swiping anyone to the left or right. The split second timing of these turns and non collisions would draw various degrees of instinctive gasps and winces from westerners. But the locals thought nothing of it. It was as natural a part of life as breathing; as if the machinery were extensions of their body. 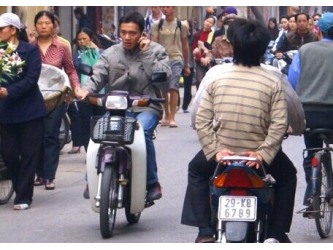 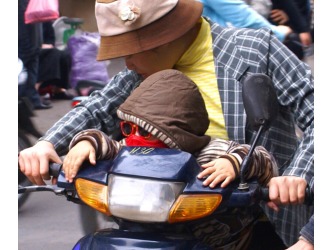 I  called it the  "chaos theory"

We took a boat on Ho Thac Ba at the end of the 1st day of riding. 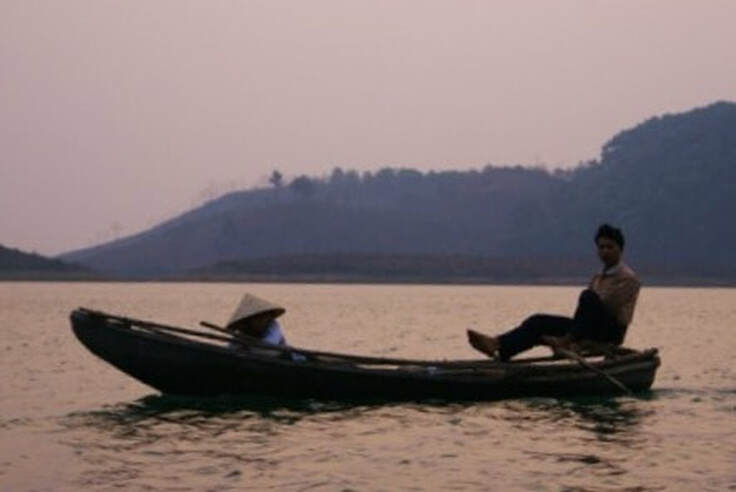 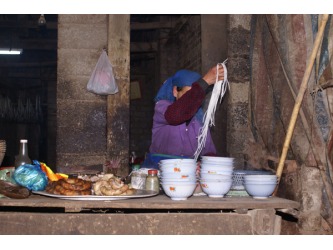 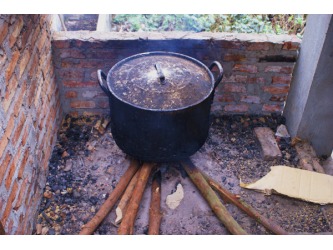 Noodles came with every meal - even breakfast. I was noodled out by the fourth day. Sometimes we had what I began calling "mystery meat" which was the reason most of us (me included) would pass on the unidentifiable meat portion of our meals. We knew dogs, snakes, and various rodents could be served as main courses or side dishes. I sorely missed assorted vegetables and having a variety of fruit, but the trade off was the soul feeding experience of seeing remote stretches of a beautiful country with that free wheeling exhilaration only riding a motorcycle can give. I love feeling the road - it's curves, it's dips, it's texture - and being touch-ably close to the whole environment. I was awed, and at times humbled, by the beautiful, friendly, welcoming hospitality of the Vietnamese. 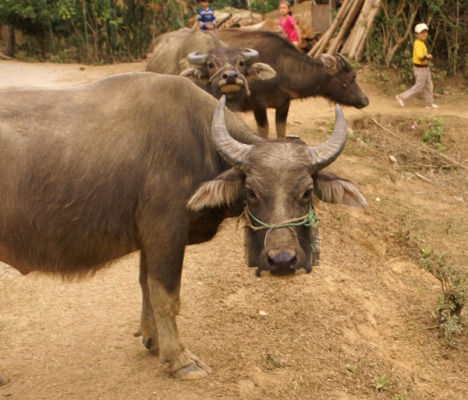 We often had to navigate around animals in the road..I loved the water buffaloes! 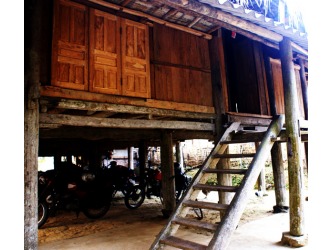 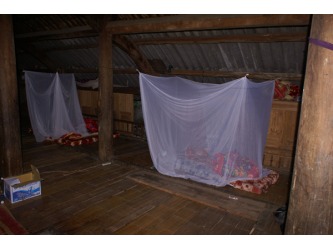 Our first homestay accommodations. We each camped out beneath our nets in one large room. 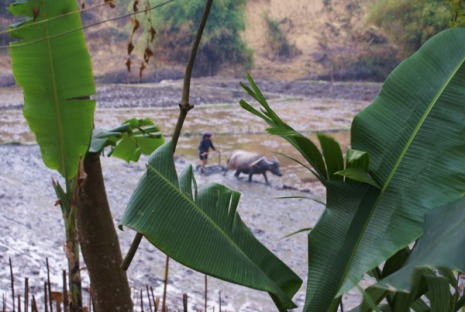 Sipping on a luke warm, faintly coffee-like morning beverage, I took in the local scenery: a woman plowing the rice paddy with her water buffalo... 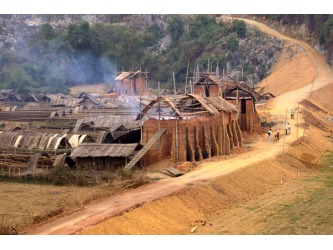 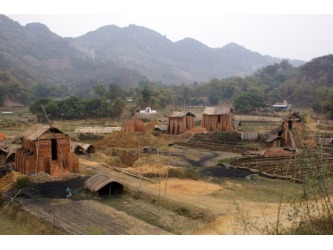 Above are pictures of a brick making plant. 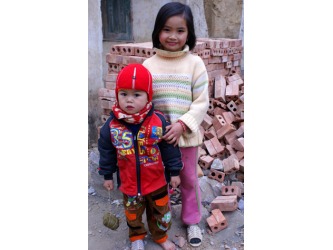 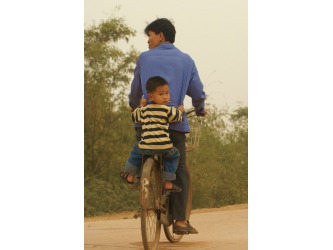 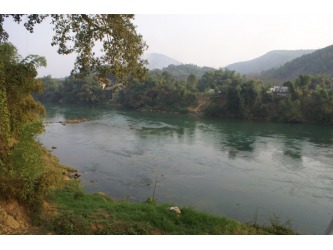 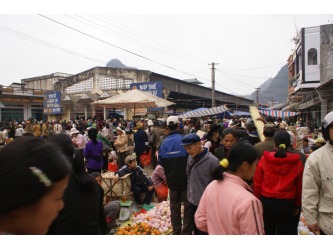 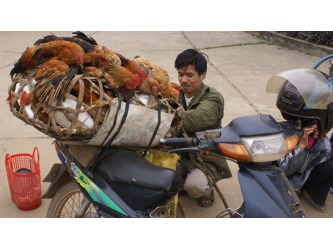 After our second night, we woke to a huge crowd in the tiny village. It was the by-monthly market day. That meant people for miles around gathered to sell whatever they could. I saw puppies being sold. Chickens (like above) were a common site. Freshly grown food was offered for sale - cooked and uncooked - that came from family gardens or one of the many small, family run farms. As a nearly 6 feet tall American woman, I certainly drew the stares and giggles, especially from children, as I walked around the town towering over the Vietnamese! One of the men on my tour was 6'4" - so the two of us walking through the crowd was quite a sight! 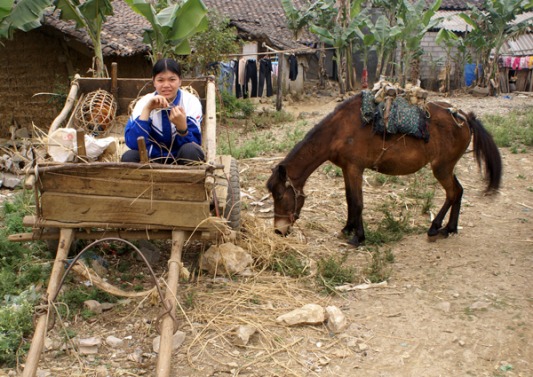 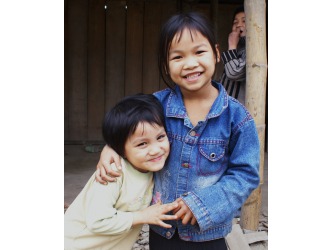 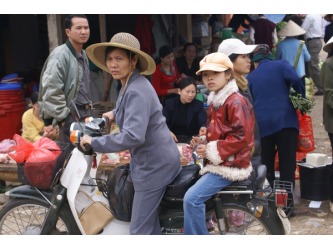 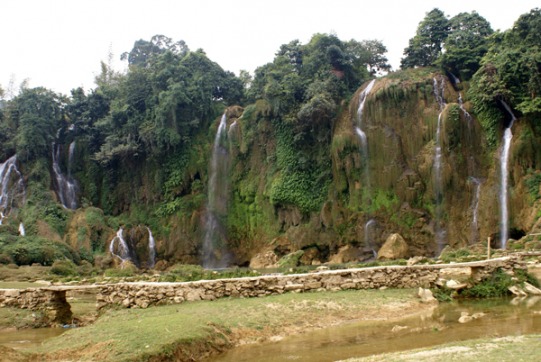 Waterfalls on Vietnam's border w/ China
I've basically summed up the ride. There were lots of little side stories and such, but you get the gist. Oh ... I  did leave out one amusing night. It's my rat story.

I had rats crawling on me at one of the homestays. And I mean crawling ON ME! Talk about creepy. I grew up in the mountains around mice and rats so I'm not squeamish, but I do not like them making contact with me. I actually think they're pretty cute from a distance, but it was dark and I was in Vietnam and these were Vietnamese rats. They were doing this high pitched chattering thing  in the corner of my room at first, and while I wasn't happy about it, I figured I could deal with it as long as they stayed in the corner. But they didn't.

They got closer and closer and then one ran over my head... well that was unnerving as he#@. I yelled some expletives quite loudly, which didn't help a thing. No one came to my rescue. I just had to endure the night until I could tell the guides in the morning. We stayed there a second night and the home owners gave me their sealed off bedroom where I slept like a baby. My riding crew, on the other hand, knew the rats were downstairs somewhere so they had a very restless night.
NOTICE:
I received an email from Kevin who lives in Vietnam. He strongly advocates that people without a Vietnamese licence and without proper insurance do not drive in Vietnam. He says he has seen too many accidents where Westerners were injured badly or fatally. Make sure you have evacuation insurance (a policy that covers flying you out of Vietnam for health care) and that you are fully aware of the dangers of driving in Vietnam.