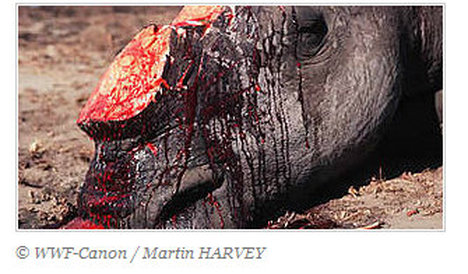 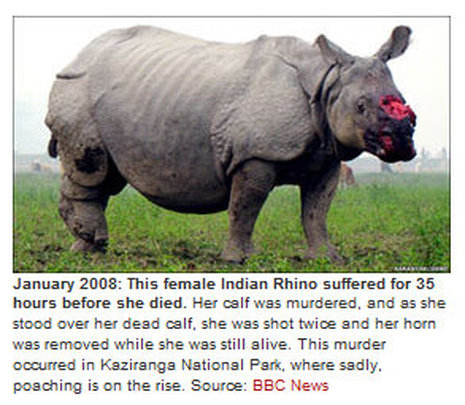 This was posted on www.savingrhinos.org
“The rate of poaching increase may appear to be faltering, but the bottom line is more rhinos than ever were poached in 2011,” said Dr Colman O Criodain, WWF’s wildlife trade policy analyst. “If left unchecked, poaching gangs could put the survival of these iconic species in jeopardy.”
STRAIGHT FROM INTERNATIONAL RHINO FUND:

STRAIGHT FROM WWW.SAVERHINOS.ORG:
Spread the word about the rhino poaching crisis. Read articles about the illegal rhino horn trade  and please share the information.

http://www.savingrhinos.org/
"South African law enforcement officials made 232 poaching-related arrests in 2011, compared to 165 the previous year. Sentences imposed for rhino crimes have also increased in recent years, with poachers and horn smugglers receiving as long as 16 years in prison."  read more at source: www.wwf.org
SUPPORT THE INTERNATIONAL RHINO FUND and also learn why to not buy products using PALM OIL 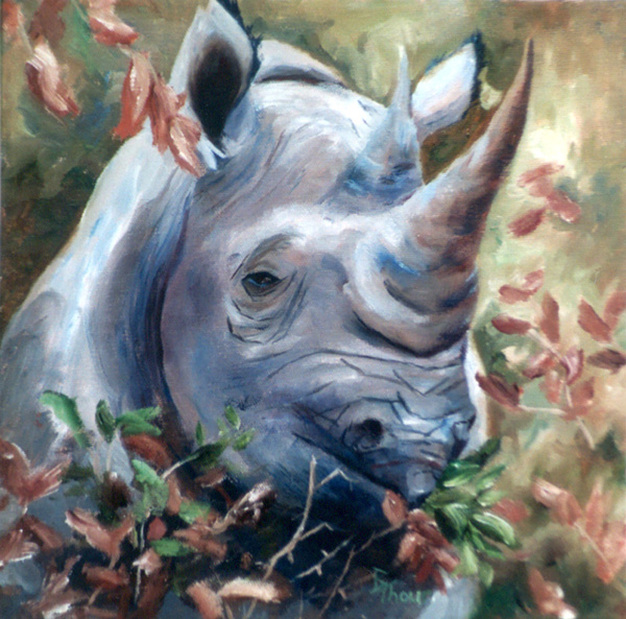 Original Painting by Brenda Thour - click image to go to her website
Rhino poaching is on the rise in Africa ... READ MARCH 2010 STORY

PALM OIL IS KILLING THE RHINO? AND KILLING ORANGUTANS?
more on Palm Oil .. a must read!!! 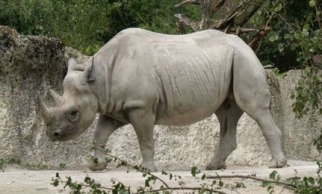 photo from Care2.com
Straight from Care2.com posted by Jake Richardson :  Jun 23, 2010 2:03 pm A $7 million conservation project will return 20 male and 12 female black rhinos to Tanzania over the next two years. Tanzania reportedly only has 70 rhinos left. The rhino conservation project also aims to improve and protect their habitats in Serengeti, Ngorongoro and Maasai Mara National Parks. Serengeti National Park covers 5,700 square miles and is home to 200,000 zebra, but very few rhinos remain due to poaching. So far five of the black rhinos have been flown to Tanzania with batches of six at a time to come soon. READ FULL ARTICLE
BELOW ARE LINKS FROM SAVINGRHINOS.ORG
Be sure to check out their website
MORE RHINO FACTS 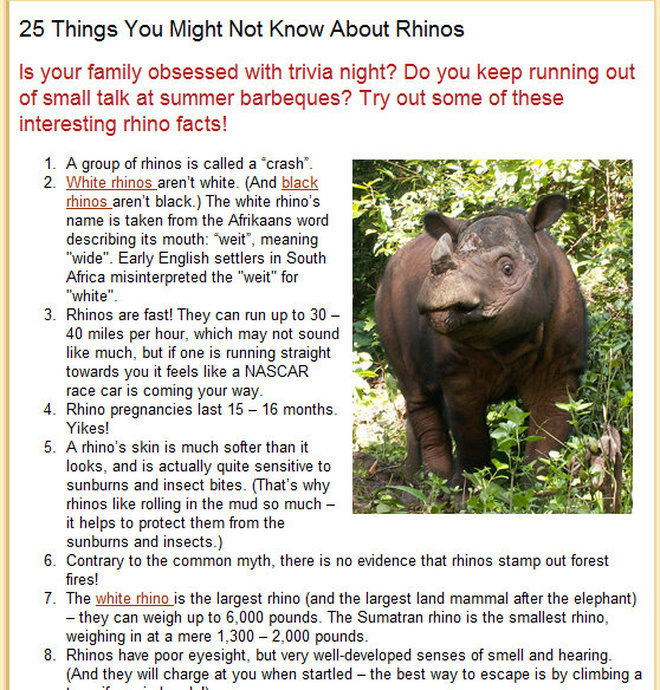 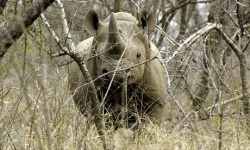 photo by Alexander Joe
According to the Wild Animal Rescue Foundation of Thailand  a rhino horn in 2007 was getting as much as $14,000 on the black market... Read more

Nine black rhino from KwaZulu-Natal game reserves in Africa are being airlifted to a new home as part of a range expansion project for the critically endangered species.

In an effort to ensure the survival of critically endangered black rhino, the World Wildlife Fund (WWF) and Ezemvelo KZN Wildlife (EKZNW) are partnering on a project designed to establish founder populations of black rhino throughout KwaZulu-Natal and other parts of Africa.

The goal of the black rhino (Diceros bicornis) expansion project is to stimulate breeding among the animals and increase populations throughout Africa.

According to local news reports, a total of nine rhino will be airlifted to a new home. So far, eight have already made the journey: Two each from Hluhluwe Game Reserve and the St. Lucia area, and four from the Imfolozi wilderness area.

The destination of the rhino cannot be made public - at least for the time being - due to poaching concerns.

The airlift process starts by identifying a suitable rhino from the air, and darting it with a safe tranquilizer drug. In about five minutes, the rhino is groggy enough to be roped and and blindfolded.

Once the rhino is safely restrained, the capture team inserts earplugs into the animal's ears, and rolls it into a large cargo net. The net is sturdied by a steel frame and cable before being lifted by the helicopter.

The helicopter transports the rhino to the drop-off point, where it is carefully lowered to the ground, to a waiting veterinarian. The vet performs an examination - and then the unconscious rhino is gently pulled (using a small truck) into a crate designed especially for the purpose of moving rhino.

An antidote is administered, and the rhino is transported in its crate to the new destination by truck.

Rhino poaching crisis
The widespread illegal slaughter of black rhino for their horns reduced the population from 65,000 in 1973 to a low of just 2,300 by 1993.

Sadly, there has been a shocking increase in rhino poaching in the last few years. Wildlife experts attribute this to rising incomes in China, where demand for the rhino's horn is insatiable - and trade in endangered species products continues to flourish. An unfortunate Chinese superstition attributes healing powers to the rhino's horn, claiming it is a medicine for reducing fever and relieving pain. (Not as an aphrodisiac, as is widely believed.)

Now that more people can afford expensive and illegal rhino horn, rhino are being slaughtered at an alarming rate.

The illegal trade in rhino horn has become so pervasive that, according to reports, well-organized poaching syndicates are believed to be working with Chinese and Vietnamese nationals throughout Africa to kill rhino and smuggle the horns to Asia.

Today, there are approximately 4,240 black rhinos - thanks to conservation efforts.

• This article was shared by partner Ecoworldly, part of the Guardian Environment Network

ARTWORK IS FOR SALE and offered by courtesy for this site by artist Brenda Thour. Please visit her website at: http://brendathour.com . Thank you Brenda!