DYEING THE FEATHERS FOR MORE PROFIT 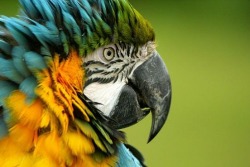 photo from ecoworld.com
Written by Jace Shoemaker-Galloway
Illegal traffickers are catching large numbers of burrowing parrots, Cyanoliseus patagonus, and dying them in a hydrogen peroxide bath to change their colors.  The bleached birds are then sold as macaws, a more expensive and valuable bird.  Burrowing parrots have olive green backs, blue wings and yellow stomachs with a red splotch.   But the colorful Blue and yellow Macaw, Ara ararauna, are worth double the price of burrowing parrots, and can fetch up to $530 each in the exotic trade market.

Dyeing Can be Deadly (No pun intended..) READ MORE 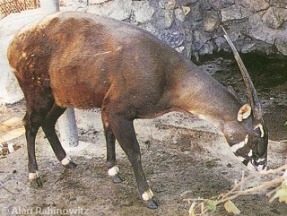 The Saola, which has been named on an international list of ‘critically endangered’ species, has long horns that slope backwards and belongs to the wild cattle family.

This  is generally considered to be the greatest animal discovery in recent times.... READ MORE.. 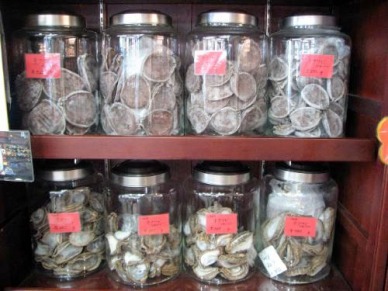 "The illegal wildlife trade is common in parts of East Asia. Recently we covered a story on Borneo, where critically endangered tiger parts were openly sold in dozens of markets on the island. Last week a wildlife photographer published several photos of the wildlife markets open in a Burmese casino town. Last year the International Fund for Animal Welfare (IFAW) and Traffic conducted research into the online wildlife trade in China. They found thousands of illegal animal parts or items made from animal parts for sale on major Chinese web auction sites.

In a 10-month study in 2007 IFAW found more than 1,900 illegal items, created from 30 protected species, for sale on the major Chinese auction sites. Traffic said it found almost 4,300 advertisements for illegal animal products on sites in China, Hong Kong, and Taiwan.

Web companies do have some filtering systems, and obviously they take down any illegal auctions that are brought to their attention. Traffic, however, believes they should do more. Joyce Wu of Traffic said: “The major Web site companies should be more proactive and take the responsibility for the products sold on their Web site.”

While there were a wide variety of illegal animal products for sale, there were two particularly popular species. Elephant ivory and tiger bone products were the most popular sellers in China. Ivory is usually sold in carved souvenir form and bought by collectors, while the tiger bone products are usually bought for use in traditional medicines for arthritis.

Many of the online vendors are able to get around auction filters because of the tonal quality of the Chinese language. The word for elephant can also have several other meanings if pronounced slightly differently. This means the sellers can use a word that has a different meaning than elephant to describe the ivory, but is still easily recognizable."

This video is from In Defense of Animals. Knowledge about atorcities is not something to turn away from. Learn so that you can help the defensless against the ruthless... please care enough to click.